Linda! Linda! Linda! Is a 2005 Japanese movie about an all-girl band that forms from the fallout of another all-girl band and dedicates itself to playing a gig three days a way. It starts right after the singer and guitarist quit, forcing remaining members Kei, Kyoko and Nozomi to reassemble as a covers band, playing the best of Japanese punk band the Blue Hearts and recruiting the first girl they see, Korean exchange student and shy weirdo Son, as replacement vocalist. With her limited Japanese she promises to do her best. I try not to pick favorites but Son rocks. She brings a nervous but gently demented Su Tissue vibe to their band, now called “Paranmaum” (Korean for Blue Hearts). It would be one thing if her character was hiding an enormous vocal talent, as in Little Voice or jeez, Elf, but it’s much more endearing that she’s not: she’s just trying her best. And it turns out her best is good enough! This is a movie about wanting something really badly and that something is modest but true, a nice movie for the New Year. 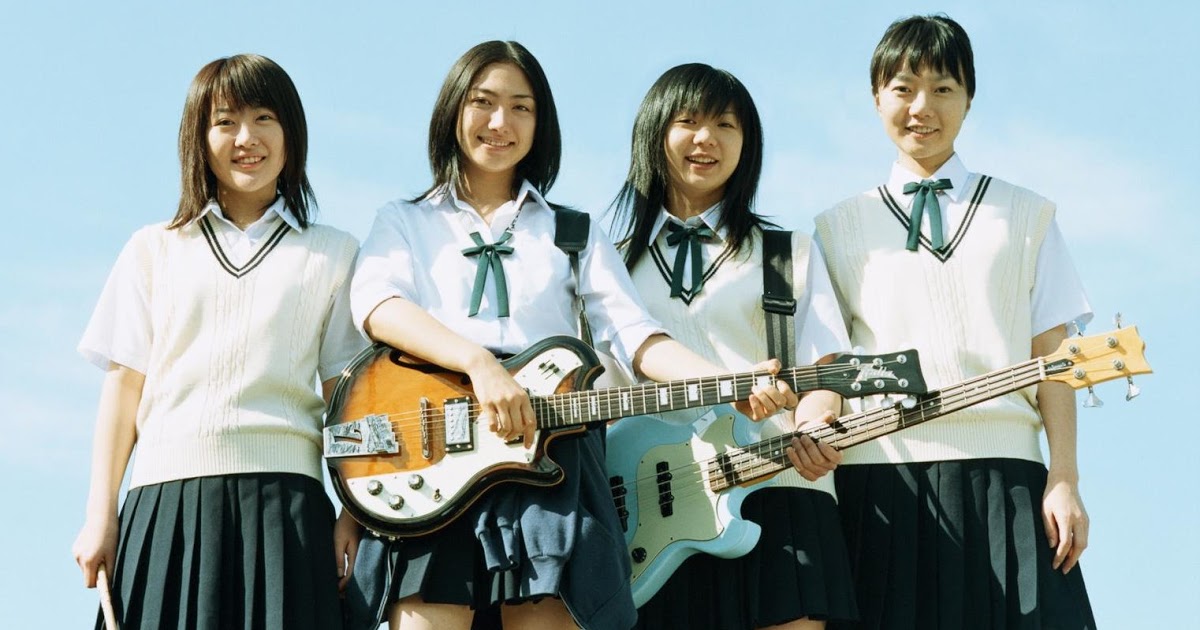 Linda! Linda! Linda! takes place over three days, from the day that “Paranmaum” decide to play their school’s upcoming concert to the day of performance. It captures the way time moves when you’re a teenager and so little of it is your own, how you share space and attempt privacy, how you invent hours of the day and improvise zones to call your own. Kei plays guitar in the family room with headphones on, Kyoko drums on books because she doesn’t have drums, Son buys one drink so she can be alone in the karaoke bar for hours. It moves slowly-- the first time I watched it, sick with something, I fell asleep-- but is true to the odd rhythm of a seventy-two hour day, the way time dilates when you’re working hard on something you love, the way the school day drags and the pauses in between. It’s quiet, with a minimal soundtrack by James Iha and the psychologically ultimate sound of chicks tuning guitars. Linda! Linda! Linda! is a great dramatization of sucking at something until you don’t anymore and the private joy that brings. It’s maybe the only rock-n-roll movie that’s about practice, correct me if I’m wrong. Most biopics omit this part of a musician’s life, the greasy, weird and lonely years spent getting good, why, I don’t know, I’d love to watch Buddy Holly fuck up. I’m trying to think of another unglamorous, practice-intensive music movie and only coming up with 8 Mile. “Terrible,” Kei says after their first practice, and everyone laughs because you know what, it’s fine. Practice is another great thing to think about in the New Year, I struggle to cope with learning curves because I want to be the best. But practice can be fun, and jamming is free!

If anything, Linda! Linda! Linda! reminded me of a Swedish movie I saw as a teenager, Show Me Love, which felt real to me at the time, realer than the spate of shitty high school movies like She’s All That and Can’t Hardly Wait that made me think life was a contest I had already lost by having Joan Crawford’s face and Bart Simpson’s body. Linda! Linda! Linda! feels real, down to its minor characters and low-boil interpersonal drama, its anti-climactic romances and rocking five (seven?) minute finale. Even the dream sequences are understated and natural, gilded with a super subtle magic, the fantasy not of being worshiped but appreciated: wow. Picture a sheet cake and make a wish.  I hope everyone reading this gets everything they want in the New Year. If you lapsed on your resolutions, who cares? Make new ones. Thanks to Jacob for the recommendation and as always, thanks for reading my blog. :-)
at January 12, 2020